And in fact, 2 gallon per minute shower heads have become so widespread over the past few years that they’re now considered old and there are even newer ones that are as low as 1.5 to 0.5 gallons per minute!

And it also saves energy. Since you’re using less water, there’s less water to be heated.

Meanwhile, you don’t notice a difference when showering. The three different types are:

Adding the ability to turn off the water in mid-shower

Some shower heads allow you to turn off or turn down water flow. This is useful if you are soaping down or shampooing and don’t need any water until it’s time to rinse. This is often done by pulling a chain or turning something.

My shower head didn’t come with that feature so I purchased a separate valve that allows me to do this. The valve goes between the pipe and the shower head as the following photo shows. 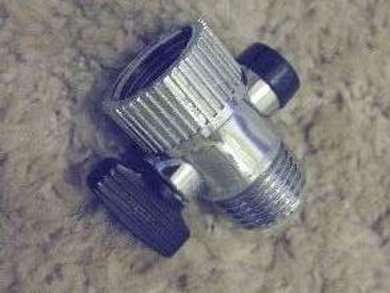 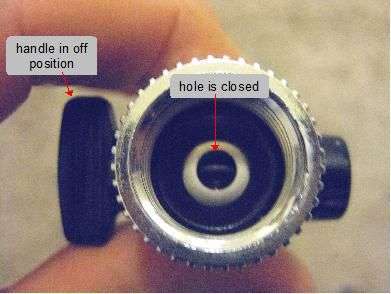 Measuring water use with and without using the valve

I timed each part of a shower and got the following numbers. I have medium length hair (male). Results are shown where I leave the water running the entire time and where I use the valve to turn off the flow of water during times when I’m just soaping, scrubbing, and/or shampooing and don’t need the water running. Two different shower sequences were tried, a 5 step one and a 3 step one, to see if combining things would speed up the process and decrease water use.

So combining steps didn’t make a significant difference in water use, at least not for my hairy body (:)). It does make a difference for some. Note that the flow from a 0.5 gallon/1.9 litre per minute shower head may be so low as to require longer rinse times, especially if you have long hair, than with a higher flow shower head. Multiplying by one quarter as I’ve done above may be too simplistic for some.

Drip when the valve is in off position

I measured the amount of this small drip from my valve and it was 0.15 gallons per minute (0.55 litres per minute). From the last table above, the water flow is off for 2 minutes, 25 seconds, which amounts to a total drip of 0.36 gallons or 1.3 litres.

With water in your eyes, you may find it difficult to find the valve. A foot pedal can be devised which is easy to feel for and step on to turn on/off the flow of water. If the valve uses a pull chain instead of the turning knob shown above, then the chain need only be lengthened to reach the foot pedal. Stepping on the foot pedal pulls on the chain enough to toggle the setting, on or off. A spring pushes the pedal back up for the next time you step on it. 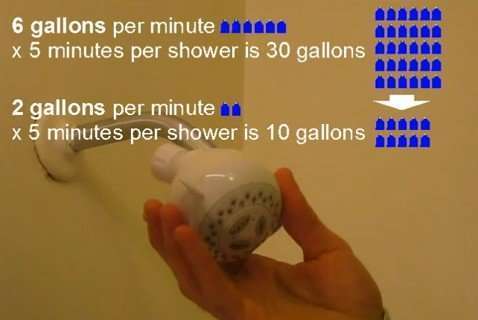 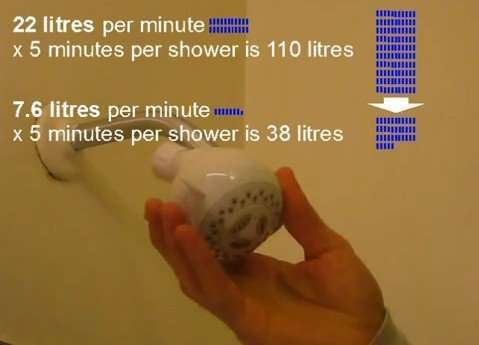